After 15 months of the Covid-19 pandemic shutdown the Texans have gone through a metamorphosis with their organization as they added players, changed bases, and revitalized their mindset for a postseason run. Coach EMAC has been working on the passing game to improve their chances in the games ahead. He has declared his team ready for all comers.

12/1/2020  – Texans self isolating:   As December comes in, the Texans have begun self isolating to get ready for the next games to be played. With a 4-2 record they are halfway through the season and on the wait list for other teams to catch up. They are in good position to make that final run whenever the season resumes during the Coronavirus pandemic. To date none of the Texans or their coach has been affected. Truly Thankful.  Tex Weatherford – Houston Chronicle reporting

Doubling down is what the enthusiastic player will do when he believes he can walk away with it all in a poker game.  The “Showdown in San Diego” was played on 10/10 in 2020, that’s doubling down.  When the 49ers and Coach Rasta hosted the “Showdown” against the Texans and Coach EMAC doubling down was not on their mind, getting a “W” was.  When these teams last played, a missed 50 yd field goal was the difference in the game.  Coach Rasta had taken down the Vikings earlier in the season and Coach EMAC was very concerned it could happen to him.  But the “Showdown in San Diego was more of a show up for the Texans as the 49ers couldn’t get any of their teams phases except special teams which responded with a 95 yd TD on the kickoff to tie the game after the Texans went up 7-0 after a long drive.  The rest of the game was all Texans as Coach EMAC went 8-10 in the passing game and Coach Rasta couldn’t hit anything but open spaces.  This “Showdown” goes to the Texans 31-7.             Tex Weatherford reporting for the Houston Chronicle

The Vikings and Coach Ajah (Pat Pat to Coach EMAC) were home to the visiting Texans in “Showdown in San Diego” and a throw down was what each team got.  When the last played, Coach EMAC escaped with a 26-20 O.T. win and the Vikings were not letting Coach EMAC forget that fact.  As the teams fought through every play, the 1st quarter ended 0-0.  In the 2nd qtr the Texans came alive to take a 6-0 lead as shaky hands led to the missed XP.  The rest of the half remained scoreless as the Vikings were threatening on the final drive of half but ended at the Texans 20 yd line.  The Vikings, inspired by their final drive before the half, came flying out of the blocks with a score of their own to tie the score 6-6 (Vikings missed XP).  Coach EMAC rallied the troops by switching to QB live format to slow the Vikings pass rush and it paid off with another TD to take a 13-6.  A kick return by Kleinsasser brought the score to 13-12(another missed XP).  The middle of the 4th qtr, the Texans continued with the QB live format and scored again to take a 19-12 lead (another missed XP).  The Vikings were not done in this “Showdown” as Dalvin Cook came out of the backfield and caught the pass that brought the Vikings to 19-18 game.  The Vikings, not wanting another O.T. to decide the game, chose to go for 2 and the lead.  In a brilliant call to let the QB roll out to the left as he done on an earlier play.  The QB does his thing only to be shut down by the Texans DB at the 2 yd line ending the 2 pt conversion with 2:34 remaining.  The Texans take possession at their 20 and hold the ball until time expires.  Texans 19-18, what a “Showdown”.                               Tex Weatherford reporting for the Houston Chronicle

With the Texans next game scheduled for San Diego on 10/10, the Texans have added 4 new players to their squad to beef up the defense as they look to solidify their position in the league. Since the pass defense has been a sore spot this season, they are hoping these additions will be what is badly needed for the final push in the season. A stout pass defense along with their balanced  offense should make for a more formidable opponent as the season continues.

The Texans are 2-2 on the season and have gone over what went wrong in all 4 games. Coach EMAC is determined not to allow the errors made in those games affect him going forward. The inability to get one yard in the Steelers and Browns game cost the team. Not utilizing all the weapons available to the team cost victory against the Steelers, and undue stress against the Browns. Now the lessons learned from those errors are behind them and capitalizing on opportunities presented are of primary emphasis going forward. The stretch run is before the team and those lessons learned will be valuable during the final stretch.

7/11/2020  –  Was a blast and FUN IN FUNTUCKY WAS FUN. The Texans had their fun as well as they split two on the vibrating field. As they couldn’t overcome their own misfires against the Steelers, they kept battling although the score doesn’t reflect it. Several 4th and 1 miscues left they reaching for the “V” but unable to grasp it.

The Battle with the Browns was a lot tougher than the score shows. It was middle of fourth quarter before the Texans could actually breathe in the game. Then scored to finish the final score 23-0.

An eerie sound is coming from Coach EMAC’s garage as the Texans home field is silent as week #7 of the Covid-19 crises continues. Covid-19 has caused the Texans’ camp to silence everything. When this whole stay-at-home edict was implemented, neither Coach EMAC nor his team thought it would last this long. Patience and perseverance have gotten the Texans this far but now rest is the mandate for the entire organization. When what you love is the continual humming of the vibration of your team’s field, it is hard on morale when that field is silent for an extended period of time. When this rest period is finally over, Coach EMAC and the team will gear up for a slugfest with whoever’s on the other side of the field. Until then, silence may not be golden, but it is what is needed at this time.

Six weeks after our last gameday, the Texans are getting ready for whenever the next game will be played.  The players are getting restless with nothing but free time on their hands. With each passing day, the team is being diligent by staying focused on the task ahead. That task is to finish the season strong by taking down every opponent they face through the playoffs. Since this is Coach EMAC’s final season, the team is looking to get the “CHIP” that has eluded him these 20 years.

By keeping his team in small groups to eliminate the spread of the virus, Coach EMAC wants a healthy squad to accomplish the task before them. And as this virus continues  to ravage our state, our nation, our world, the Texans have set their resolve to continue pushing through so they will be ready to crack plastic and come out victorious whenever the restrictions are lifted.

After a horrible game vs the Eagles, and the stay-at-home orders from the governor of Texas,  the Texans have taken this down time period to revamp their offense and defense.  Coach EMAC was not pleased with the team’s inability to move the ball on offense nor their inability to slow down the other team’s  offense especially the passing game.

So keeping with their plan to limit the number of players on the field, the defense have their sessions on Tuesday (D-Line), Thursday (LBs) & Saturday (Secondary).  The offense gears up on Monday (QB & Backs), Wednesday (QB & Receivers) & Friday (O-Line). This allows each squad to put in their time to optimize efficiency and reduce risk of contamination.

Continuing to improve his team to eliminate further letdowns, Coach EMAC is preparing them to succeed in all conditions facing them in the future.

Texans on lockdown – 3/14/2020
Since the CoronaVirus has been deemed a pandemic, the Texans organization has been put on self quarantine. This comes on the heels of our nation, all sports, all gatherings have suspended activity for the next 2 weeks according to Coach EMAC. This is a precautionary measure as no team members or the coach nor his family is affected at this time. Here’s  hoping the rest of the EF community are taking precautions to ensure safety for all.
Tex Weatherford reporting from Houston

Opening day of the 2020 LAEFL 20TH season had the Texans hosting the Rams while their stadium is still under construction. Not only the stadium, but the Rams used a substitute team (Ravens) to face the Texans. Once the game began the Texans used a strong running game to take a 7-0 lead. Ravens struck back with 60+ TD run to trail 7-6. The Texans regrouped  and controlled the clock and the game by adding three more TDs to win 28-6.
Texans at Eagles
The news regarding the turf in Lincoln field (Eagles  home) is not exaggerated. The Texans experienced  that on their first possession when 3 receivers lost their footing causing the Texans to punt. The Eagles had no footing issues and was able the move the ball on the ground and through the air as they soared to a 41-12  victory.
Reporting from Houston,
Tex Weatherford 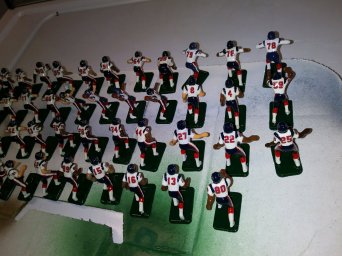